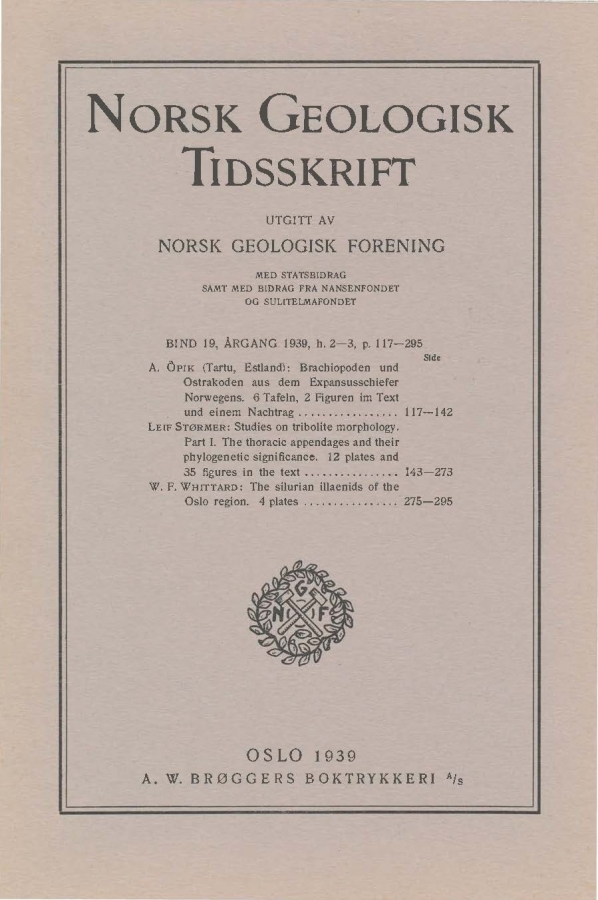 Conflicting conceptions as to the more detail ed structure of the trilobite legs, have necessitated a re-study of the existing material. While most trilobite legs preserved are exposed in ordinary cleaned specimens, the much disputed structures in Ceraurus and Calymene are based on a number of singular slides which naturally are very difflcult to interpret. In order to obtain a more accurate knowledge of the construction of the limbs, the author has made section-series (grinding) of Ceraurus-specimens from Walcott's original collection. By photographing the ground surfaces at intervals of about 1/20 mm, material was provided which permits the preparation of highly magnified models on glass plates and in wax or plaster of the thoracic limbs. The models demonstrate the structure of the tergites, indicate the position of muscles and elucidate the biramous appendages, particularly the little known proximal portion and the distal gill-blades or filaments. The series demonstrate a precoxal segment, and the lateral branch, generally called the exopodite, is attached to this basal segment and therefore represents a preepipodite, nbt an exopodite or an epi podite. The presumed "spiral structures" are only due to a special preservation of the gill-blades. A re-study, partly of the literature, of other limb-bearing trilobites shows that the trilobite appendage is a very characteristic and conservative structure, a type of leg also found in the crustacean-like arthropods of the Middle Cambrian. Relations of the trilobite !imb are evidently found in the appendages of meroslomes and arachnids and possibly insects. The crustaceans, however, show little relationship although they have distinct biramous appendages. The lateral branch in the crustacean leg is attached to the basipodite and therefore not homologous with the gill-branch in the trilobite leg. The zoological position of the trilobites will be considered more in detail in a second part dealing with cephalic appendages and describing section series through the cephalic region of Ceraurus.