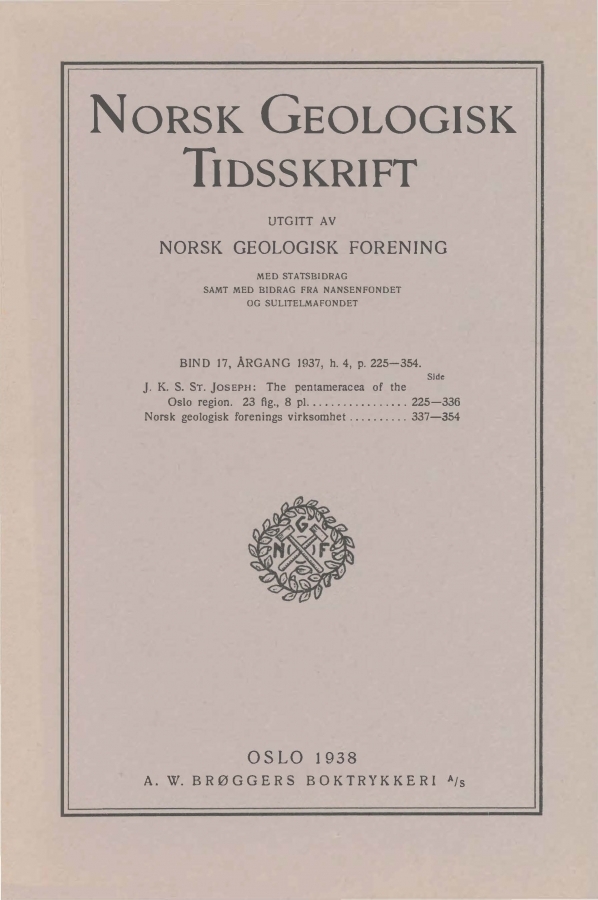 The greater part of the material described in the present study was collected by the late Professor j. Kiær at the time of his detailed investigation of the Silurian rocks of South-eastern Norway. Kiær's stratigraphical results were published in his well-known monograph " Das Obersilur im Kristianiagebiete" , and he had intended, apparently, to devote a separate work to a description of the fauna, especially the Brachiopoda. This projected work was unfortunately never completed, but Professor Kiær's entire collection, numbering several thousand specimens, is preserved at the Palaeontologisk Museum, Osio. Of the Brachiopoda, the Pentamerids form the most widespread and important group, abundantly represented as they are in nearly all the different areas of the Norwegian Silurian. It appears that Professor Kiær had a few plates prepared, illustrating some of these Pentamerids, in view of a projected monograph on the Brachiopoda of Southern Norway: although man y of the specimens had been identified, no notes exist, nor has it always been possible to delermine the originals of Kiær's figures.

The Pentamerids are very abundant at many horizons in the Norwegian Silurian, but comparatively few genera and species are represented. All the material, however, is extremely well preserved, and instead of a state of preservation as casts, familiar in British specimens, not only do the interiors remain intact, embedded in matrix, but in many cases comparatively little exfoliation of the exterior shell has laken place. One further consideration enhances the special value of this collection. Nearly all the material has been very carefully labelled, so that the majority of specimens can be assigned to their original localities and horizons; with regard to the latter not only to a definite zone but often (by reference to the figures and tables in Kiær's monograph) to within a few feet in the succession.

With one or two exceptions the Pentamerids in question are not of great use for very detailed, stratigraphical zoning, and consequently a strictly palaeontological approach is adopted. By this means it is hoped the betler to illustrate the facts that have been learnt concerning the evolution and origins of this group, and where necessary the work has been extended beyond the limits of this collection. Thus, with regard to the origin of the Pentamerids, specimens of some of the early forms that occur in America and in Greenland have been examined, although without throwing much light on this problem. Again, the possibility that the essentials of the Pentamerid structures might be derived from such a form as the common Ordovician genus Porambonites led to an investigation of that genus. Representative specimens of each species and genus have, whenever possible, been compared with the type material. while an intensive search has been undertaken amongst the early literature on the subject with the aim of settling controversial points of nomenclature that have arisen.

The work, of which the results are here described, has been undertaken in the course of the last two years at the Sedgwick Museum, Cambridge. The writer wishes to express his thanks to Professor Holtedahl and Dr. A. Heintz for entrusting him with the description of this collection; and to the latter and to Dr. Leif Størmer for affording him facilities at the Palaeontologisk Museum, Oslo, and for guiding him over some of the classical Norwegian localities. He wishes, also, particularly to thank Professor O. T. jones and Dr. O.M. B. Bulman for advice and kindly criticism, and Miss H. M. Muir-Wood and Mr. A. G. Brighton for access respectively to specimens in the British Museum (Natura! History), London, and the Sedgwick Museum, Cambridge. Finally, he would express his thanks to the Department of Scientific and lndustrial Research, London; to the Goldsmiths' Company, London, and to the Master and Fellows of Selwyn College, Cambridge, for the award of grants during the tenure of which this paper has been written.