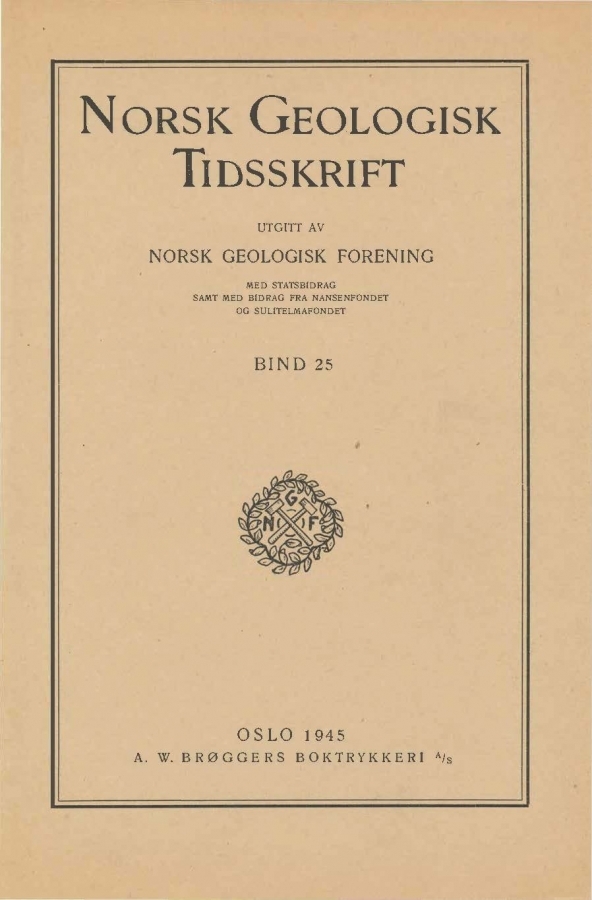 When Holtedahl (Holtedahl and Schetelig 1923) studied the Ordovician section of Hadeland, he was struck by the marked difference in the development of the Middle and Upper Ordovician series in the SE and NW parts of the district. This important stratigraphical feature was emphasized also by Kiær ( 1926) in a paper describing the Upper Chasmops Series of the NW part of Hadeland. Recent field research (Størmer 1943 b) has shown that the NW (Mjøsa) development is also found further E thus comprising the northem part of Hadeland southwards to a W-E line, largely corresponding to the border between the parishes Gran and Lunner. South of this line the southern (Oslo) development occurs, apparently without a gradual transition between the two facies on either side of the line. Because of the sudden change in the facies, I have been inclined to interpret the peculiar stratigraphical conditions as due to a horizontal displacement of the sediments N of the line, a displacement forming a Caledonian nappe-structure, comparable with the tectonic features demonstrated by Swedish geologists in jamtland. Traces of geological disturbances of this kind have, however, not been noticed in the few and less complete exposures along the line mentioned.
To solve the stratigraphical and tectonic problems involved, it will be necessary to carry out a detailed palæontological and stratigraphical study of the sediments concerned. I have planned, it is to be hoped in collaboration with other palæontologists, later on to describe the extensive Middle Ordovician Chasmops Series both ai Hadeland and in other districts of the Oslo Region.
The scope of the present paper has been to elucidate the Tretaspis Series overlying the Upper Chasmops Limestone or the Sphæronid Limestone of Hadeland. These series have proved to be very differently developed in the southern and northern sequences. The field researches, which were chiefly made possible through grants from Statens Forskningsfond, were carried out in 1935, 1941 -1944. I wish to express my sincere thanks to Cand. mag. J. Dons, G. Henningsmoen, and H. Major for valuable assistance during the excursions in the field. I am particularly in depted to Mr. Dons who has discovered several new localities furnishing a major part of the fossil material described below.
Professor Holtedahl has kindly permitted me to use his previous notes regarding the Upper Ordovician sections, particularly along the railroad from Roa to Lunner. In preparing the illustrations of the present paper I have had valuable assistance by Miss Bergliot Mauritz and Miss Lily Monsen.