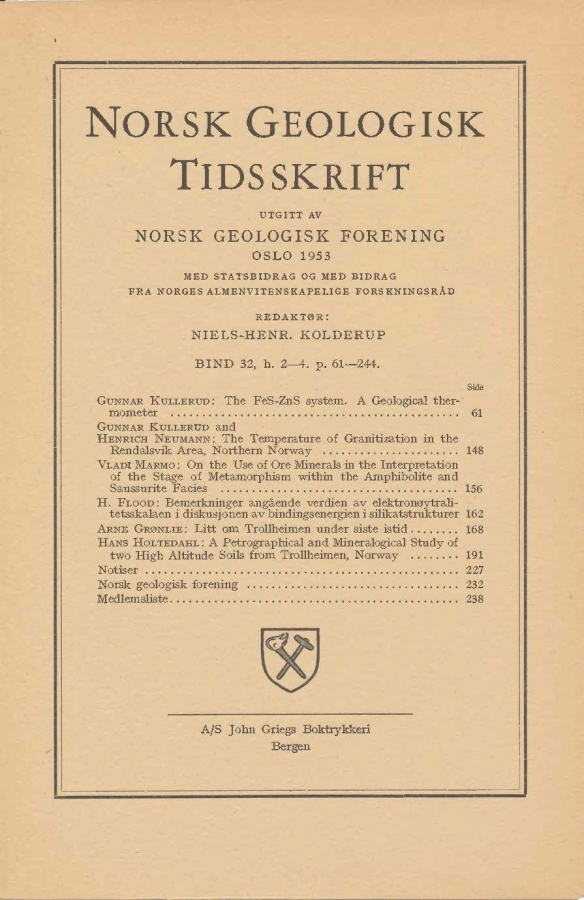 1953, 1953
A petrographical and mineralogical study of two high altitude soils from Trollheimen, Norway.
32

Sedimentary petrographical methods are used in the study of two soils on the summit-plateau of Midtre Gjevilvasskamm, Trollheimen, 1640 :meters above sea level. The soil-layer of the plateau, i.e. section I, is about 30 cm thick and overlies a hornblendeschist. It is a well-sorted sand, with medians of 0.17 mm and 0.19 mm. The silt and clay content is very small, showing a slight increase in the lower part of the section, probably as a result of mechanical illuviation. From the mineral studies and the mechanical composition it is assumed that the soil is a weathering product of the underlying rock. The soil is thought to be mainly a product of physical weathering, but a small amount of chemical weathering is presumed to have taken place.

The soil of section Il is also from the plateau, north of section I. Under a veneer of stones there is a well-sorted sand which with increasing depth becomes gradually more unsorted. The medians of the three soil samples taken from the top down to a depth of 70 cm, are 0.19 mm, 0.17 mm and 0.7 mm respectively. The silt and clay content of this section is much higher than that of section I, reaching a maximum at a depth of 25-30 cm. The latter is believed to be due to mechanical illuviation. From the study of the mineral-and rock material of the soil, both macroscopically and microscopically, and of the mechanical composition, the soil is believed to be of glacial origin, but highly disintegrated by weathering in its upper part. As in section I the weathering is believed to be mainly physical.
The age of the soils is not thought to be older than the last (Wisconsin) glaciation.