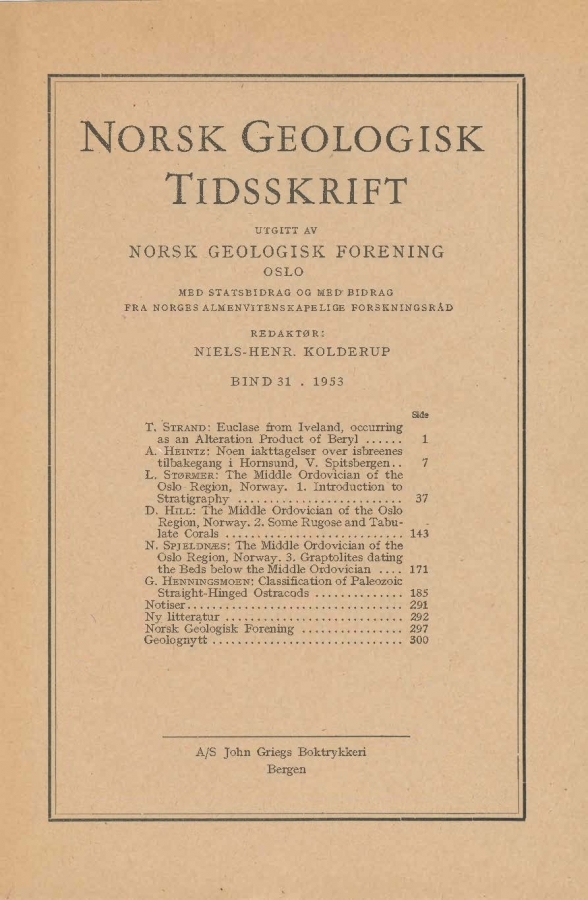 The present paper is the first in a series dealing with the stratigraphy, paleontology and tectonics of the Middle Ordovician of the Oslo Region, the latter comprising 11 districts located between Langesund and Ringsaker. The term Middle Ordovician is discussed. The sequence of the Oslo Region favours a lower boundary either below the Upper Didymograptus Shale (base of bifidus zone, 4a α1) or below the Ampyx Limestone (base of gracilis zone, 4a (β), boundaries corresponding to the base of Llanvirn and Caradoc respectively. An upper boundary is suggested below the Lower Tretaspis Shale = zone of Tretaspis seticornis (4c α) .
A historical review deals with the different periods in the paleontological-stratigraphical investigation of the Middle Ordovician in the Oslo Region.
A survey of the Middle Ordovician section based to a large extent on new observations by Heintz (=Hz), Henningsmoen (=Hm), Skjeseth (= Sk), Spjeldnæs ( = Sp) and the present author ( = St), is presented. Each district is treated separately. The large fossil collections accumulated through more than 100 years will be described eventually. Thanks to determinations of the graptolites by Dr. Bulman, Cambridge, England, it has been possible to date most of the zones. The Orthoceras Limestone (3c α—γ) seems to be equivalente to less than one graptolite zone only, i.e. the zone of Didymograptus hirundo.
Considerable variation in facies occurs, ranging from black graptolite shale, mixed graptolite and trilobite shale, shale, occasionally strongly arenaceous, with shelly faunas, limestone with shelly faunas, to algal and coral limestone, including reefs. Local emergences have been traced and certain general paleogeographic features outlined.
The Oslo-section is preliminarily correlated with sections in Sweden and the Baltic. A more detailed correlation is postponed until the major fossil groups are described.