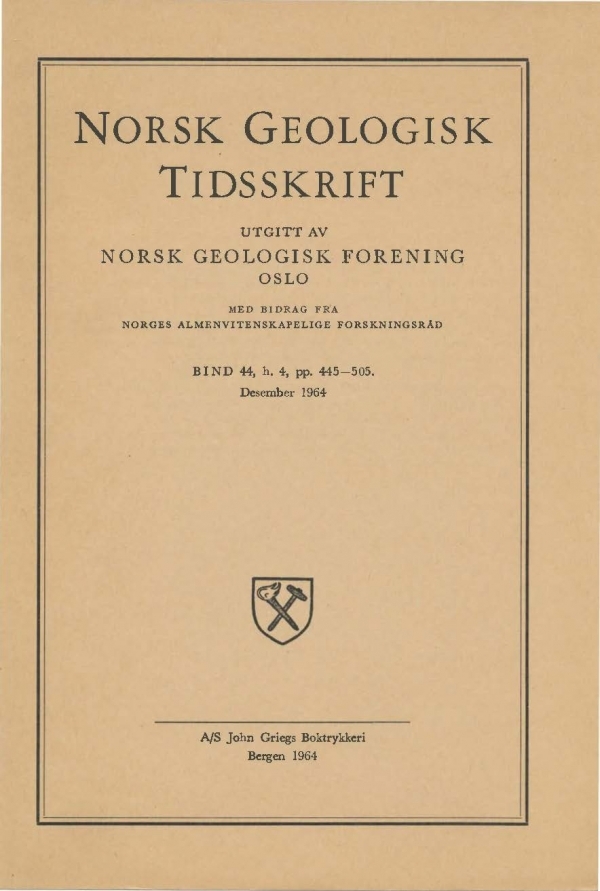 1964
The precambrian rocks of the Telemark area in South Central Norway III. Geology of the Vrådal granite.
44

The Vrådal granite is one of a num ber of small granitic bodies in southern Norway that was emplaced in gneiss and supracrustal rocks during the latter part of the Precambrian. It is a circular pluton about 6 km in diameter with a cross section similar to a steep-sided funnel. The foliation of the country rocks is concordant to the contact within a few hundred meters of the pluton, but it flattens gradually within one to two kilometers north and south of the contact. Country rocks adjacent to the contact are deformed into sheared isoclinal folds with near-vertical fold axes and with axial surfaces that are concordant with the contact.
The country rocks are comprised chiefly of granitic gneiss and lesser amounts of schistose amphibolite and quartzite: their mineral assemblages correspond with the lower amphibolite facies. There is no evidence of contact metamorphism in the country rocks adjacent to the granite, and the grain size of the granite does not diminish near contacts.
Large irregularly-shaped bodies of massive amphibolite occur randomly in the granite. The texture and mineralogy of the massive amphibolite is similar to Precambrian supracrustal lavas that crop out several kilometers north of Vrådal, which suggests that the massive amphibolite in the granite may represent roof pendants or stoped blocks of a former cover of supracrustal rocks.
Steeply-dipping shear fractures radiate from the center of the pluton and extend short distances into the country rocks. Other writers have suggested that a radial fracture pattern in a small pluton is evidence of deep-seated forcible emplacement of the body.
A diapiric mode of emplacement is suggested for the Vrådal granite in light of the close correspondence of the geological features of the pluton with those of salt diapirs and other granite diapirs.