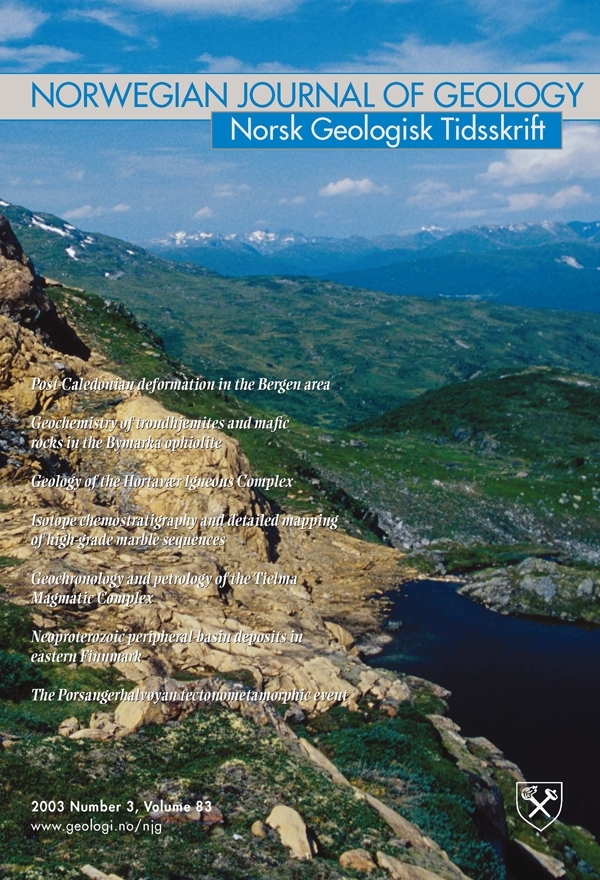 The Hortavær intrusive complex consists of a wide range of plutonic rocks, from gabbro (calcic) to alkali feldspar syenite (alkalic). Emplacement at 456 ± 8 Ma (U-Pb, titanite) was primarily as a series of dikes that range from tens of cm to many meters in width. Magma mingling structures are ubiquitous and magma mixing occurred locally. Therefore, the intrusive complex can be considered to be a zone of magma transfer and storage rather than a single pool of magma. The complex is characterized by CaO-rich rock compositions and by the presence of minerals typical of assimilation of carbonate-rich metasedimentary rocks, such as calcite, titanite, scapolite, nepheline, Ca-garnet, and idocrase. These features have been interpreted as the result of intense assimilation of host calc-silicate rocks. However, major and trace element compositions show inflections in the magmatic trend, which argues for crystal-liquid separation processes. Furthermore, some syenites are quartz bearing, which suggests a quartzofeldspathic component in the contaminant. When combined, these observations suggest that the Hortavær magmas evolved by assimilation-fractional crystallization of parental gabbroic magmas to evolved syenitic ones. Fractionation was initially dominated by separation of clinopyroxene, which was stabilized at the expense of olivine because of assimilation of carbonate components of the host rocks. The excessive fractionation of clinopyroxene forced melt compositions to alkali-rich, silica-undersaturated compositions, rather than SiO2-rich ones expected with olivine fractionation. Such assimilation was possible because of the open-system behavior of the intrusive complex (magma transfer zone) such that CO2 was lost before it could stop assimilation reactions. Development of evolved quartz syenitic magmas required a shift to assimilation of the quartzofeldspathic component of the host rocks, which occurred because carbonates are insoluble in such evolved magmas.